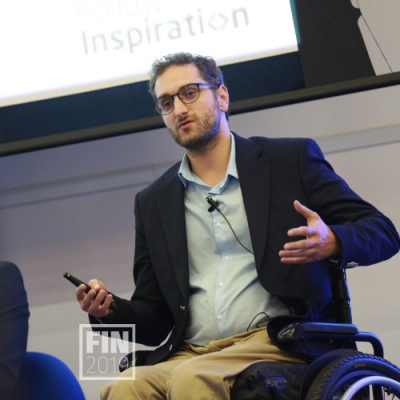 Luís de Matos, born in Covilhã - Portugal, son of a factory worker and an iron construction operator, grandson of shepherds, graduated in Computer Engineering from the University of Beira Interior.

In 2012, it founded Follow Inspiration, a technology startup based in Fundão, where in recent years it has been developing the wiiGO project, the first fully autonomous shopping cart to help people with reduced mobility transport their purchases, as well as others. technological solutions specially adapted to the specificities of its users and industry.

It is pioneering the way it develops autonomous solutions using computer vision and sensory fusion, thus revolutionizing the way robots move between people and within factories. Thus created a revolutionary technology and culminated in the registration of several patents already granted in the United States of America and Europe and with application in France, Spain, Germany and Portugal, capable of turning any robot into an intelligent and autonomous robot.
Outside the business, he has in his curriculum participated in the “Acreditar Covilhã” Movement where he served as Entrepreneurial Agent and supported the “Nova Energia” Movement, led by Adolfo Mesquita Nunes, in the last municipal elections in Covilhã. He is also a member of the board of IPDAL and a member of an advisory group of the Portuguese President of the Republic Marcelo Rebelo de Sousa.

“Hope has two daughters, indignation and courage; Outrage teaches us not to accept things as they are; The courage to change them! ”