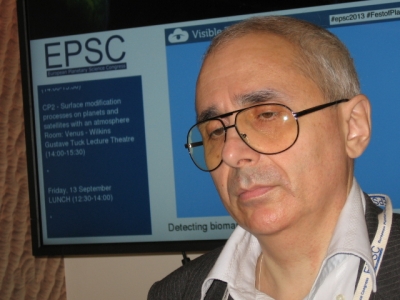 Dr. Irakli Simonia - an astrophysicist, inventor and specialist in the ancient astronomy. He works in various fields of astronomy, astrophysics, cosmochemistry, as well as the history of astronomy and archaeoastronomy. He investigates the small bodies of the solar system, interstellar and circumstellar matter, the processes of interaction of radiation with a matter, ancient astronomical monuments and manuscripts. He is the author of over 80 scientific papers in these fields, as well as of inventions in the field of technical physics. He is an associate professor of astronomy at the School of Natural Sciences and Medicine of Ilia State University, Georgia. He leads courses in astronomy, molecular astrophysics, cosmochemistry, and ancient astronomy.

During 2009-2014 he was an adjunct professor at the Center for Astronomy at James Cook University, Australia. He is a participant of international conferences and symposia, a full member of the American Astronomical Society, the International Astronomical Union, and the European Society "Astronomy in Culture". His scientific interests also include the problems of the origin and evolution of life in the universe, interstellar absorption, nature of dark matter and, the properties of gravitational waves. More about scientific activity of Irakli Somonia see: Marquis Who’s Who in the World.

My activity includes: research and teaching.