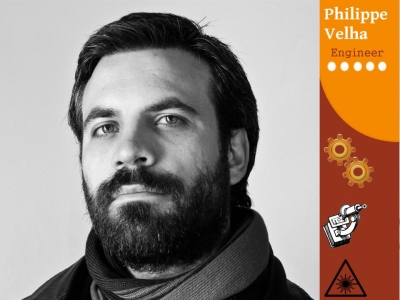 Philippe Velha is an established physicist whose expertise lies mainly in Silicon Photonics and nanofabrication. Born in 1981 in Voiron (France), he has spent most of his childhood in this town situated in the middle of the Alps. In 2001 he entered the École centrale de Lyon, considered one of the most prestigious schools of engineering and continuously ranking one of the top five in France. In 2004 he graduated from the École with a degree in engineering and a Master of Science in Integrated Digital Electronics. The following year he started a PhD in Silicon Photonics working for three different laboratories: Institut d'Optique, Laboratoire des Technologies de la Micro-electronique and SiNaPS from the CEA – Grenoble. In this multi-disciplinary environment he designed, fabricated and measured the first high quality factor integrated micro-cavities known today as nanobeams.

He became a research assistant at the University of Glasgow in 2008 after obtaining a doctorate degree in Physics, with honours, from the Université Paris-Sud XI.

His research field spans from purely passive Silicon Photonics to more challenging topics such as light modulators, photodetectors and integrated light-sources on Silicon. In 2012 his expertise in nanotechnology allowed him to fabricate, in collaboration with M. Mirza, the smallest nanowire (2.9 nm) ever fabricated by top-down approach.

Along the years he has been involved in the following projects:

His work has been published in several high impact international peer-reviewed scientific journals. He is co-author, at the moment (2015), of over sixty publications and a book which are regularly cited as reference (over 500 citations).

Over the years, he has been involved in the supervision of over 10 PhD students. Teaching of the scientific methodology has been delivered through example and hard work. He has also been teaching a course in Electronics for over 3 years at the University of Glasgow.

Contributions to the scientific community have always been a priority for Dr Velha, in fact his involvement in reviewing scientific articles for international peer-reviewed journals such as Applied Optics, Optics Express and Applied Physics Letters has been constant over the last years.

His multi-cultural background allows him to be fluent in five languages. In his spare time he enjoys nature walks, hiking, skying or simply being in the countryside. He has a passion for rugby and he used to be a player as a university student.