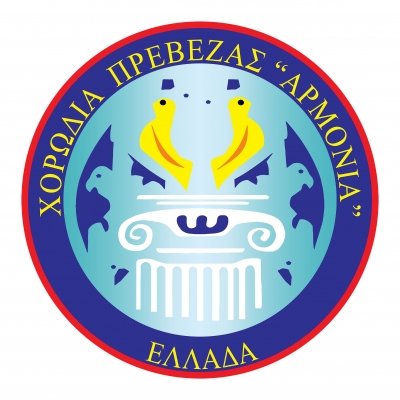 Choral Society "Armonia" of Preveza was founded in 1969 by a group of Preveza’s choristers with love for choral music and with the aim of promoting choral music in a small provincial city. Since then the choir has traced a brilliant march both in cultural events in Greece and abroad.  Its purpose is the music culture of its members and the general dissemination of the song in its best form of classical and modern repertoire (Greek and foreign) and spiritual culture, fraternity and solidarity between membership of the Association. It has accomplished so far an important and serious work, both artistic and social, especially with the organization of the International Choral Festival which is one of the most reliable of this kind worldwide. The purpose of the festival is the establishment and consolidation of the institution for the promotion of choral music, the development of high spiritual and cultural level, the cultivation of musical feeling and dissemination of Byzantine music around the world. It promotes the culture in its city fostering music education and initiating audiences in sounds of high artistic value. More than 1000 people per year participate in the events of the festival, while 2000-3000 people are attending the events. And as well, since 1995, in the frames of the International Choral Festival of Preveza, the International Competition of Sacred Music has been organized with the participation of choirs from all around the world. The artistic committee of the festival is, composed annually by renowned personalities of worldwide reach and prestige, thus giving our festival the validity and the prestige it deserves. In addition, this festival gives a kick-off in a small tourist season for our city, helping tourism businesses both to advertise and have little economic benefits from the early start of the season. So, the festival is an institution with the highest cultural benefits for our country so far and of an international reputation and recognition. Its high prestige makes it one of the greatest events of the summer choral world. It is connected to all global federations of choral music (International Federation of Choral Music, Europa Cantat, The choral network, etc) and has links to all the major festivals abroad. Another point worth mentioning is its educational character. It is so important because it attracts Greek and foreign musicians who attend its festivities while participating in seminars and master classes organized during the festival in order to educate them on the choral ;
Finally, Choral society "Armonia" of Preveza has been organizing a series of events with the aim of underlining the significance of connecting the Olympic spirit with choral music and also it has shown great sensitivity to social problems of the country and has organized events to reinforce: The Association of Friends of Children with Tumors "Flame", The Foundation "Hope" ,The Center for Children with Special Needs in the district of Preveza, Children who were victims of the devastating earthquake in San Juliano Italy, The victims of the Beslan Olsetia (Russia), etc.
The society numbers 250 children in its children's departments and 100 youth and adults in the adult classes.

We are thinking of submitting a proposal for funding within the framework of the European Union's  program on the exchange of good practices in the training of choir festival volunteers. The training team should consist of volunteers who wish to exchange views on the organization of such events
GREECE
3 years ago
1 Comment Share Read Idea