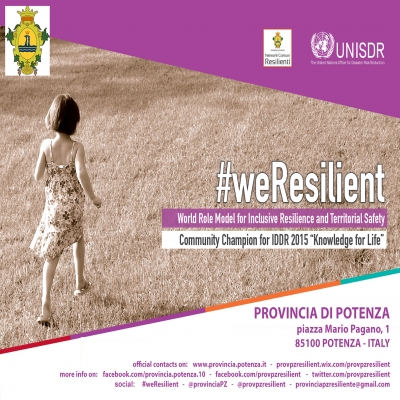 The Province of Potenza is an Italian Local Authority of sub-regional and super-municipal levels whose political-institutional action is performed also by the interaction with the Municipalities. It counts 100 Municipalities among its territorial and government extension.

In Italy one of the main institutional tasks for a Province is to provide proposals for “territorial development”. This task is performed by means of specific tools and consequent actions that must be as much realistic, concrete and effective as possible.

In 2013, after a very long-lasting process that took some years, the Province of Potenza adopted its Structural Master Plan (or Territorial Coordination Plan, TCP), the specific tool that draws the local policy-making proposals for the development of the provincial territory and, in particular, addresses the local actors - including Municipalities and communities - towards more appropriate territorial and urban land-use and government with a wide area and multi-stakeholder comprehensive approach.

As regards the contents, a proposal driven by the combination of the main territorial issues has been elaborated: sustainability - including the protection, use and management of territory and environment - and (territorial/community) safety, the latter given by the combination of disaster risk reduction and climate changes contrasting policies and measures, in perspective of a general inclusive and smart growth. This comprehensive territorial policy making has been defined as Territorial Resilience!

With its strong commitment and experience, the Province of Potenza provided its contribution to the three global agreements processes concluded in 2015. Capitalizing its wide expertise in different field of institutional intervention - experience that is also at the basis of the Structural Master Plan contents - the Province of Potenza “Local Authority” contributed to:

For the massive policy-making action performed and the relevant results so far, the Province of Potenza and its 100 Cities and Communities network have been acknowledged by the UN-ISDR as “World Role Model for Inclusive Resilience and Territorial Safety” and a “Community Champion for Disaster Risk Reduction“ under the theme “Knowledge for Life”.

In conclusion, the role the Province is playing is that of skilled, qualified and passionate institutional coordination, support and facilitation of processes. Based on the results so far, we are confident that the outlined strategy will create new opportunities for a development that is truly sustainable for humans, territories, climate and ... the entire planet.

The Province of Potenza is proud to provide full support to other both Italian and foreign Local Authorities that intend to perform similar paths towards inclusive territorial Resilience.